A not very mysterious Mystery Walk Given that mapping takes me to many local places I signed up with the Ramblers Association to do a 'mystery walk'. Of course, these are so-named by analogy with 'mystery shoppers', but I find the description engaging in an oxymoronic way.
I registered ages ago, but only received my starting point co-ordinates last week: SK 530 380 (drop 4 of the digits and you'll see the origin on my OSM username - a geocode). Unfortunately, this is right on the edge of Nottingham, and part of the idea is to stay within the boundary of a single highway authority (the local government body responsible for footpaths), so my route was already constrained. A second constraint was that towards the city is a large contiguous area of parkland, consisting of the main campus of Nottingham University (University Park) and two public parks (Highfields and Wollaton Park). Together these provide a large area of pleasant and varied walking: but they are not public highways, so there wasn't much point reporting path quality and accessibility there.

I really had only one viable destination: a small remnant of 'countryside' between Nottingham city and the suburb of Bramcote Hills. This is a ridge of Sherwood Formation sandstone (Permo-Triassic age), with remnants of the characteristic heathland flora of Sherwood Forest. I know the area, but not particularly well: it is too far for casual naturalising and not so hugely different in terms of plants and insects from places closer to home. For those in the immediate locality Bramcote Ridge is highly valued with an active friends group. The part in Broxtowe district is largely managed as two separate Nature Reserves: Alexandrina Plantation and Sandy Lane Open Space. I hadn't realised until yesterday, but the part of the ridge in Nottingham does not seem to have any particular designation. 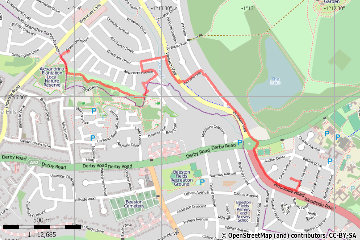 The whole area is accessible from many entry points, but many of these are obscure little paths at the end of dead-end streets. It is more-or-less impossible to work out access from the OS Explorer map: fortunately the area is pretty well mapped elsewhere! Using OSM-based maps I plotted a route which would take me onto Bramcote Ridge and (largely) stay within the City boundary. Of course I added a couple of mapping desiderata to my route: a couple of postboxes and addresses. I also wanted to see if I could find any waymarks for the notoriously elusive Robin Hood Way, one of two long distance paths promoted by the county council.

My route took me along the Robin Hood Way from close to Wollaton Park, but I saw no signs of waymarking until I reached the top of Bramcote Ridge, just as the path left Nottingham. I did pass a surprising large number of side roads which enabled me to add a large number of address interpolation ways. Very high quality Bing imagery means that it's usually possible to extrapolate and assign addresses for the whole street. Although the paths on to the ridge are not easy to find they are heavily used : and anyway most are in OSM.

I did find a 1933 Nottingham City Boundary Post. The city boundaries were extended in 1933 to incorporate some surrounding villages which had already been suburbanised. Boundaries with other places were also adjusted. Sseveral are shown on the provisional edition 1:25000 map of SK53, so I was on the lookout. These seem to have once been quite common: I've put a couple of others on OSM: they're an antidote to the often made claim that boundaries cannot be surveyed.

The only negative to report back to the RA is a complete dearth of waymarking, but this might be expected in a city. Nottingham, like many cities, did not have to maintain a definitive map of Public Rights of Way, and is only doing so now, because of the cut-off date of 2026 in the CRoW legislation. And, I only managed about a quarter of the 2 mile distance off residential roads.

Overall, I learnt nothing I didn't already know: The Robin Hood way is badly waymarked (or rather it's original waymarks have not been maintained); OS mid-scale mapping is not much use for finding off-road walking routes in cities; and OSM provides more useful cartography and GPS maps for this kind of walk. Urban local authorities might be relucant to spend money on waymarking for several reasons (vandalism, fly-tipping and lack of money come to mind). An alternative would be to providing focussed mapping for walkers. They already do this for cyclists, and I know a good cheap source of information.
Posted by SK53-osm at 16:00