Ashes to Ashes: mapping the mappers

Of all the trees that grow so fair,
Old England to adorn,
Greater is none beneath the sun,
Than Oak, and Ash, and Thorn.
Rudyard Kipling, A Tree Song from Puck of Pook's Hill
Ash Dieback is a tree disease which has been affecting European trees for over a decade. It hit the news in Britain when it was detected in many places last Autumn.

As this is a blog about maps, I won't dwell on the supine official response to this disease as a threat or once I arrived. Peter Marren guesting on Mark Avery's blog covers the important ground. 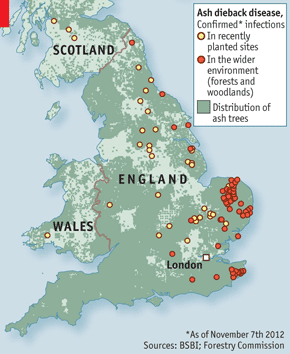 What struck me was this map in the Economist in an article about the disease (I'm not the first to use the Ashes to Ashes line from the Book of Common Prayer). It's quite a nice map, lots of information, pleasant muted colours etc. Unfortunately it's complete bollocks as a map of the distribution of Ash trees.

The clue lies in the the oddly shaped blank area near the border of Wales. I instantly recognised the shape of the traditional/historical county of Worcestershire. It is extremely unlikely that Ash trees exist in all the surrounding counties but not in Worcestershire. So it's unlikely the map is right. There are some other suspiciously blank areas including Nottinghamshire (which would be a surprise to Neil Pinder), and an area North of London which actually has a disease record. So what's going on?

I had only to look at the map to know where The Economist sourced it's data, because there is only one source where data exists for some counties and not others. This is the Botanical Society of the British Isles online research database. To quote "Because this is research-level, live data it may not be appropriate for the general public or for consultancies." And that, The Economist, includes you.

The BSBI Distribution database is used by BSBI recorders who are organised at the county (strictly vice-county) level. They can add their data to the central database or not. Obviously the recorders for vice counties 20 (Hertfordshire), 37 (Worcestershire) and 56 (Nottinghamshire) have not added their recent data. Other places in Scotland and Ireland don't have many botanists: indeed the official recorder for the Outer Hebrides lives in South Wales, and that for Mull in Cambridge. So the map above is more accurately a map of BSBI recorders and their technology preferences. Not the best map to choose.

This shows that Ash is ubiquitous with the minor exceptions of Shetland, parts of the Outer Hebrides and the far North of Scotland.

If we look at the tetrad data including the default date partitioning, not only are the gaps obvious, but also the way the datasets for individual vice counties have been loaded at different times. For instance data for Oxfordshire are there, but are of rather antique. Thus the tetrad maps tell us far more about the internal processes of plant distribution mapping by the BSBI, than they do about Ash trees. (This is a common problem with most biological recording: the maps show where mappers are not where insects or plants or fungi might be found).

In order to display the data in a way closer to the original map from The Economist I've shown the data without date class partitions in the lower of these two maps: 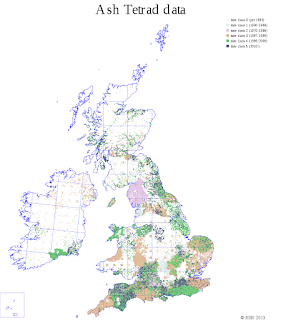 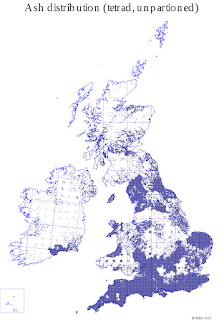 Given equal access to the two datasets the creator of the graphic in The Economist clearly chose the one which looked prettier (FSVO...), rather than the one which was accurate. This is probably symptomatic of the ash dieback disease as a whole, with government bodies (Forestry Commission, DEFRA, etc.) all preferring the wind-blown arrival hypothesis over the importation hypothesis. The former is much more convenient to let the official bodies off the hook: but there is only circumstantial evidence in its favour. The alternative that the disease arrived in imported plants has a substantial material evidence base. Occams' Razor anyone?