How accurately have Townlands in Northern Ireland been mapped?

From time-to-time newly released Open Data provides a nice opportunity to check OpenStreetMap for its accuracy in all its forms (see Hakaly (2008) for a breakdown of what this can mean).

We have known for a while that both the Ordnance Survey of Northern Ireland and the Ordnance Survey of Ireland were planning OpenData releases. When they came it was all in a rush. For now the hard work starts of checking license conditions for suitability for use in OSM and other places, as well as then working out what is really useful. However, because the townland boundaries of Northern Ireland are complete, it was an ideal opportunity to look at accuracy.


My reasons for doing this are not just pure interest. The usefulness of the Irish Vice County boundaries depends of their positional accuracy. Earlier my prediction was that such boundaries ought to be within 10 metres of their true location on the ground where they were based on townland boundaries, but this was largely based on experience with other OSM data rather than an objective statement. Thus investigating the accuracy using an independent data set provides an excellent way of testing this statement. The tests need to be done now, because (as we shall see) the nature of OSM is to fix issues spotted very quickly, and thus datasets become loosely coupled.

I adopted two approaches:
To choose which townlands to compare I followed a suggestion of Rory McCann and for each OSM townland selected the one which shared the most area in common from the OSNI data set. (I have also done it on matching names for a smaller set of data & get similar results). Note that I am comparing townland with townland, not boundary segment with boundary segment. This means that each boundary segment (other than coastal, lacustrine or riverine ones) will be included twice.

The buffering approach is based on that described by Hakaly (2008). I used buffers of 5, 10, 15 and 20 m, and then clipped the initial OSM way be each in turn.  On the scale of the whole country it is clear that most boundaries match closely. This is confirmed by checking what proportion of the boundaries fall into each buffer class: over 80% are within 5m, over 90% within 10m and nearly 95% within 20m. 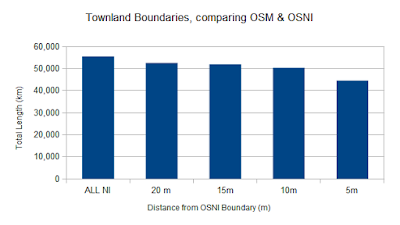 Closer inspection (as with the Umbra) shows much of the discrepancy to be present along the coast. This is not surprising, coastlines on OSM were originally derived automatically, and even when refined by hand are unlikely to accord with Mean High Water (MHW). Certainly, for my purposes, it is merely important that the OSM coastlines do not stray above MHW.

The analysis described so far focusses on positional accuracy. Looking at areas highlights a range of other accuracy issues.

Area discrepancies of over, say 5%, may be the result of any of the following:
We've already caught a few examples in each of these classes through this analysis, and no doubt will find a few more. I have not yet investigated the very apparent discrepancy along the borders.

To conclude, townland boundaries show exactly the kind of positional accuracy we expected (or perhaps hoped). Perhaps 1% of the total data (90-100 townlands from about 9000) may need some form of correction. I'm biased, but this seems pretty good, for a project principally relying on rectified photo-reduced maps from 1939! It's also worth remembering, that unlike road comparisons, there is no widely available sensor data (ie GPS tracks/point) to help boundary alignments.

When time permits I'll extend this to include OSI Open Data too. A big thanks to both organisations for releasing their Open Data. OSNI staff have been contributors to OSM for a while: they host Missing Maps lunchtime sessions in their offices.
Posted by SK53-osm at 12:01