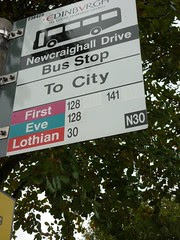 The wiki has various palaeontological layers showing how a consensus was reached for mapping bus stops: originally, they were located on the road served by the bus; later they migrated to be marked at the point of the bus stop sign (at the pole). The reasons for this were relatively straightforward:

This convention also happens to agree with the widely used mapping of bus stops on German and Austrian maps (specifically, those of Kompass). So far all hunky dory.

BUT, a group of OSMers want to replace this in its entirety. The location where passengers wait for the bus must be tagged as a platform, and additionally the place where the bus stops in the road must also be tagged. It is not clear why this change is needed (allegedly its required for public transport routing), but it is apparently better than the current approach in some nebulous way.

What is intriguing about this approach is how the basic weltanschauung of OSM is lacking from this 'proposal'. The language used for the proposal always talks about 'old' and 'new', rather than 'the widely-used consensus' and 'the proposed alternative': so it does not treat the community with respect and doesn't even start to build consensus. It lacks all sense of supporting a tagging scheme which is simple to understand and is verifiable (I can verify the existence of a bus stop at any time, stop position only when a bus arrives, and at one of the local stops a bus will stop where it can in a 100m zone depending on how many other buses are at the stop at the time). It imposes additional load on all data consumers by suggesting a radical change in tagging.

Even more intriguing is why I, or anyone else, cares about these things.
Posted by SK53-osm at 11:58 No comments: