Despite it being just after Easter and the date being announced with only a weeks notice, there were 6 of us at the second OSM pub meet-up. This time we met at the Lincolnshire Poacher on Mansfield Road: definitely a pub worth of the real_ale=yes tag.

With lighter evenings it seemed worth doing a bit of mapping before having a drink: also a good opportunity to show people the ropes. I chose the Poacher, not just because its a nice pub with good beer, but because there are quite a few places in the immediate vicinity which could do with more map survey work. These include the Arboretum, Church Cemetery, also known as the Rock Cemetery and residential areas either side of Mansfield Road.

I'd done a bit of preparation for each of these, but once I realised that there'd be enough of us I persuaded people to visit St Ann's. Although this inner city area has a poor reputation I knew a decent route, and it offered a much more varied insight into the issues associated with collecting data for OSM. 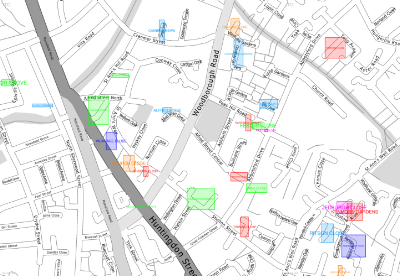 The main mapping objective in this area was to fix roads with missing or, possibly, incorrect names. I had made a print out (see above, and here registration required) from ITO OSM Analysis which provided the basis of a reasonable hours mapping. We walked a loop down behind Huntingdon Street, along St Ann's Well Road and then along the tree-lined walks of Robin Hood Chase, Corporation Oaks, and Elm Walk back to the pub.

St. Ann's is predominantly 1970s and early 1980s social housing: the area having been re-developed as part of a slum clearance programme. It was planned with a 'Radburn' layout : lots of cul-de-sacs and interconnecting walkways. Addressing and street names are really confusing as we immediately found out. We walked through a twitchell from Huntingdon Road and found houses with addresses on Sherwin Walk, but we were looking for Sherwin Close

We managed to add or correct around 10 street names, but we noticed a lot of other things. Here's a non exhaustive list of the various other objects which got mapped from this session: traffic tables, speed limits (20 mph zone), access restrictions, traffic calming measures (cushions, humps, bumps, chicanes), pedestrian crossings, cycle parking, an ATM, shops, restaurants & fast-food outlets, an old cinema (see picture), churches, a few house numbers, post boxes, telephone kiosks, bus stops, a green roof, and a dead pub. This diversity is good for an introduction as most of these only require a node adding to OSM, so its possible to focus on tagging. Cycle Parking was the immediate attention grabber as there was no space at the back of the pub for a second bike: not only was the first cycle stand we came across mapped, it was used too.

There were also a few things which didn't get mapped for sundry reasons: solar-powered parking meters, hand car-wash in the former pub car-park, a SureStart children's centre, and the East Midlands Anglo Chinese Society. In the main this is because I don't know how to tag them: but hand car washes in derelict filling stations and pub car parks are becoming such a conspicuous feature of the contemporary urban landscape they probably deserve notice.

In the pub we talked quite a bit about OpenStreetBugs: David and Marcus both seemed keen on the idea of being able to mark-up things requiring mapping as an entry-level way of contributing. Kev showed how he was using OSB to mark cycle parking. David commented that he'd want to be able to filter by a category such as 'cycle infrastructure'. We briefly talked about KeepRight as well.

This led on to David's observation that he felt that quite a lot of existing cycleways were overly generously tagged. Kev agreed and remarked that he'd recently removed a lot of cycle tags on roads in the city centre: partly in response to change signage, but also because the original mapping was less than useful for cyclists. This is definitely a theme to follow: getting some in-depth feedback on what is mapped from potential users is not particularly common with OSM. I'd like to see what we can do in this direction with the Pedals membership.

This naturally led onto the Nottingham Hackspace. Last month Marcus suggested the Hackspace would be a good place for an OSM event. I went along the following open evening to see the Hackspace and meet its members and have been thinking about what we can do together ever since. But early in April the Hackspace's landlord lost its tenancy, and I've been following the saga of finding a new space. This was finally resolved only on Monday: the new space is huge and located just to the east of Sneinton Market. I only hope there isn't a plan to move every month requiring a re-map of the space and its surrounding area.

Thanks to everyone for an interesting evening. Once again I find I'm learning lots by talking with people less familiar with the intricacies of OSM.

Lastly, I've set next month's date for 24th May back at the Lincolnshire Poacher.
Posted by SK53-osm at 20:53 No comments:

Is a research paper on OSM a derived work?

In a long an insightful blog post on Google MapMaker's US launch Mike Dobson mentions a paper by Girres and Touya. According to his blog this paper uses a similar approach to that of Muki Hakaly to analyse French OSM data. I'd like to read this paper, and consider its implications : after all I've contributed to the data that it has used. However it lies behind a pay-wall here: Girres, J.F. and, Touya, G. (2010). Quality Assessment of the French OpenStreetMap Dataset, Transactions in GIS 12(4), 435-459.

I didn't find an electronic offprints at the researchers lab site: IGN COGIT. If anyone knows where I can get a copy let me know.

I would regard it as a normal courtesy of scientific publication to give contributors access to paper based on their data. Certainly the derived data which underpin the work should be made available as Hakaly does, but it's the overview and conclusions which are of most interest. However, I'd like to pose the question: Should this work have been published under CC-BY-SA?
Posted by SK53-osm at 19:24 2 comments:

Old Ballparks and other Stadia

Recently it was noticed that the baseline at Yankees Stadium had been added as a oneway footway on OpenStreetMap. This triggered a discussion about the minutae of the game on #OSM. Now, much as I love baseball, I'm pretty hazy on the fine points of the rules, and, indeed, terminology. This is pretty much because all of my knowledge was garnered as a third-grader a very long time ago. I only ever saw two MLB games live (box scores here and here), both at the long vanished Forbes Field.

This prompted another rumination about the geography of vanished bits of the social fabric (which seems to be a developing theme on this blog).

In Britain and the States a huge number of sports stadia were built at the start of the 20th century. When I was growing up these places had a suitable romantic patina from age and great sporting exploits: a romance which belied their often smelly reality (John Bishop is very good on this). By the 1960s even with a modest amount of investment they were becoming rapidly superseded by social change. Many were difficult to maintain, were no longer suitably located (particularly when fans started coming by car) or had more profitable uses.

Cheaper air transport drastically affected Major League Baseball: it was no longer necessary that all the MLB franchises be within an overnight train journey of each other (discussed and mapped in "Spatial organization; the geographer's view of the world" (Abler, Adams and Gould (1971) pp. 377-9). So in the late '50s the Boston Braves moved to Milwaukee, the Brooklyn Dodgers to Los Angeles and the New York Giants to San Francisco. Although franchises had moved a bit before that time, it ushered in an era where owners could extort subsidies from local tax payers by threatening to move the club. Yet in many ways the more modern stadia were a false start. The multi-purpose stadia built in this period ('cookie-cutters') have now being torn down and replaced by separate parks for baseball and gridiron. That great novelty, an indoor ballpark, the Houston Astrodome is now a mouldering, crumbling safety hazard. Perversely more recent ball parks have tried to capture the feel of the early 20th century Jewel box parks.

In Britain change came later, and in response to several fatal disasters which highlighted the poor safety arrangements of many of the older grounds. As a teenager I watched games from cinder-covered terraces, or seated in wooden fire traps like that of the Bradford fire. Notts County's 1910 Meadow Lane ground even had a stand which was older than the ground, having been transported across the Trent from the county cricket ground.

These are the English Football League grounds which have vanished since I watched a match there : Filbert Street (Leicester), the Baseball Ground (Derby), Saltergate (Chesterfield), The Old Showground (Scunthorpe), Fellows Park (Walsall). I'm not particularly nostalgic for any of these, as a kid it was often difficult to get a decent view, the loos were laughable, and as we learnt, safety was poor. Filbert Street was a disaster waiting to happen: we 'watched' a game in such a crush that my father was so fearful of our safety that he hoisted us to the top of a wall away from the crowd. Variously these are supermarkets, housing developments or still brownfield.

However, the memory of great sporting drama at such vanished locations lives on in the memories of thousands of people. Over the past few years, The Observer has run a fascinating series of articles on the fate of a whole range of stadia after they ceased use for sport. These often managed to illustrate the intricate relationship between sport, economics and (urban) social fabric. Unfortunately these pieces don't seem to be available on-line. There are plenty of websites devoted to the subject: e.g., Old Grounds, and Aerial Lost Stadiums. Wikipedia's articles on the subject are usually detailed and thorough.

Stadia like many other historical sites are problematic to map on OpenStreetMap. When some fabric remains, then it's usually possible to tag this in such a way so as to indicate its original purpose. Adding single nodes for the former site (as the imported GNIS node does for Forbes Field) is probably acceptable, without challenging OSM's absence of a model for historical mapping. Culturally, the sites of old stadia might elicit wider interest, than, say, sites of battlefields.
Posted by SK53-osm at 20:33 No comments: