Plantations : woods, forests or something else?

One type of woodland area I have alluded to a couple of times in the past are plantations (see here and here). I've always been frustrated at not having found good illustrations, but in the past couple of weeks I've noted a few which either already have good open images available or I've been able to snap a picture myself.

Plantations run the gamut from small areas to fully-fledged forests. In general what connects them is that the trees are planted in orderly rows, and the plantation has an expected lifetime, after which the trees will be harvested or replanted. Photographs enable some of the variety to be shown. In turn this should highlight the sorts of information we might want to capture by OpenStreetMap tags.

Why does The Guardian think that OpenStreetMap is owned by Google

My attention was drawn by a tweet to an article in The Guardian online showing some nice examples of cartography:

To my amazement it contained this: 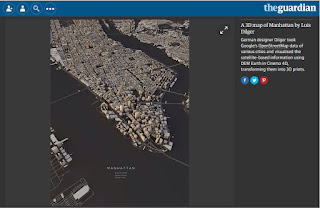 Now, The Guardian has generally covered OpenStreetMap well over the years, and has made use of appropriately credited OSM data from time-to-time over the years. Last year it re-published Serge Wroclawski's influential blog post "Why the world needs OpenStreetMap". It's former Technology editor, Charles Arthur, was very familiar with OpenStreetMap, and in turn played a big part in the campaign to get open data from the Ordnance Survey.

This error is symptomatic of two things:
There is not a great deal that the OpenStreetMap community can do about the former. After all commercial players such as DigitalGlobe have to put up with the same sort of thing. However, we can do something about the latter: but in general probably don't put enough effort into such things. (Perhaps unsurprising, its more fun to survey & add data than try and get people to get their facts right).

Clearly most of these are just straight copying from a single source. However it is not the original statement by Dilger (see link above). So it looks like The Guardian really has not checked it's facts and has the text is probably unoriginal too.

Thankfully I got a speedy response from them (thanks to twitter):

@SK53onOSM thanks for pointing that out - the caption's been amended now
— Gdn Readers' editor (@GdnReadersEd) September 10, 2015

All-in-all the episode highlights that as a group we in OpenStreetMap have a long way to go in communicating who we are and what we do to mainstream media types.


I had not planned to do much mapping on the Bank Holiday Sunday: the day was set aside for a meeting of the British Plant Gall Society at Ryton Woods, Warwickshire.


The only thing I expected to map were paths in the wood, which surprisingly are almost all unmapped (hint to Mappa Mercia folks). This is one of the best areas of ancient woodland in the county and only a short distance from Coventry and Warwick. In fact, if anything, I would have expected to write about this wood which is mainly Oak with Hazel coppice.