A tweet by Owen Boswarva drew my attention to a recent report by Public Health England (PHE) on the correlation of density of fast food outlets and deprivation.

Specifically my interest was directed at the source of fast food outlet counts. PHE used data from PointX, a joint venture of Landmark Information and the Ordnance Survey. I instantlly wondered if one could do the same thing with Food Hygiene Ratings (FHRS) open data. This is a quick report on doing exactly that.

I already had a complete set of FHRS data for September 2016. I needed to download various administrative and census geographies, population figures for Lower Layer Super Output Areas (LSOAs), Index of Multiple Deprivation (IMD) Scores for LSOAs and various files showing the linkages between the geographies.

A certain amount of data wrangling was needed to merge this data (for instance linkages, population and IMD) all came in spreadsheets with awkward column names, multiple sheets and other minor inconveniences. Once these were sorted out I had a table with base figures at LSOA level which could be readily aggregated to Middle Layer Super Output Areas (MSOAs) and local authorities. The IMD score is rebased by summing LSOA scores multiplied by population and then dividing by total population.

Using R I constructed simple scatter plots with a regression line and 95% confidence limits for both MSOA and Local authorities.

For comparison the relevant plot from the PHE report is shown below:


The final comparison I made was perhaps one I should have done at the outset. Comparing raw counts of fast food outlets from the Open Data source (FHRS) and the PointX data. PHE provided a table of counts at ward level. It took me a while to find a shape file and codes which fitted (the codes change year-on-year), but then it was easy to do a Point-in-Polygon count of the FHRS data for a direct comparison. The correlation of values was plotted in R again.


Doing this took longer than I hoped: but almost entirely because I don't know my way around the various formats of boundary data related to the census and more changeable boundaries such as the wards.

I haven't done a formal comparison of the outputs, but the visuals presented above strongly suggest that FHRS data is just as useful as the PointX data for this purpose. The main explanation for the lower count coming from FHRS is that the PointX data includes outlets which do food delivery which may include places classified as Restaurants in FHRS.

I had expected more issues with FHRS because there is clearly an under-reporting issue in inner city areas due to rapid turnover of management of takeaways (see the recent Guardian article for an in-depth appreciation of this issue). The other week at the London OpenStreetMap pub meeting in Islington I insisted that we should check the 'scores-on-the-doors' before choosing where to eat our Burritos (a habit I've learnt from Dr Sian Thomas). The three fast food outlets next to the pub didn't feature at all on the FHRS data.

In conclusion: now that FHRS data covers nearly every major authority in the country (Rutland were the last still hold out) it is entirely suitable for a range of statistical purposes.
Posted by SK53-osm at 12:40 No comments:

Skeletons in the Water

For a number of years now I have, from time-to-time, made the odd stab at trying to find the flowline of a river from the mapped surface area of the watercourse using OpenStreetMap data.

I not infrequently find, being neither trained as a geospatial specialist nor a mathematician, that, although I have a fairly clear idea of what I want to do with some particular manipulation of geodata, I am stymied. More often than not this is simply because I don't know the most widely used term for a particular technique. It was therefore really useful to learn from imagico that the generic term for what I was trying to do is skeletonisation. (I do hope my relative ignorance is not on this scale.)

Armed with this simple additional piece of knowledge immediately opened out the scope of resources available to me from wikipedia articles, blog posts, to software implementions. Unfortunately when I first tried to get the relevant extensions (SFCGAL) installed in PostGIS I was not able to get them to work, so I shelved looking at the problem for a while.

Very recently I re-installed Postgres and Postgis from scratch with the latest versions and the SFCGAL extensions installed fine. So it was time to re-start my experiments.

Once I was aware of skeletonisation as a generic technique I also recognised that it may be applicable to a number of outstanding issues relating to post-processing OpenStreetMap data. Off the top of my head & in no particular order these include:

What follows are some experiments I've done with water areas in Great Britain. I have mainly used the ST_StraightSkeleton function, with rather more limited time spent looking at ST_ApproximateMedialAxis. The two images below show my initial attempt to find hydrographic basins: this works merely by chaining together continuous waterway linestrings. These results are not bad, but several major rivers are divided into multiple watersheds. The map of Ireland shows the problem better because the Shannon system appears as a number of discrete watersheds, largely because the Shannon flows through a number of sizeable lakes. Other major rivers illustrating the issue in the UK are the Dee, Trent and Thames.

So the naive approach raised two problems:
Of course the simple way to address the first one is just to include areas of water as additional objects in the chain of connected objects. However I would also like to replace rivers as areas, and smaller lakes with linestrings as this type of generalisation can greatly assist cartography at smaller scales. The lack of a source of generalised objects derived from OSM has been a criticism of its utility for broader cartographic use, so this is another aspect of this investigation.

So now with skeletonisation routines working in PostGIS time to look at some of the basics.

I've taken Windermere, the largest lake in England, as an example to work through some of the issues. Windermere is a long thin lake which should have a fairly obvious median line. However, it does have some islands which complicate the matter.

Both the straight skeleton & the medial axis are complicated multi-linestrings if I use raw OSM data for Windermere. Progressive simplification of the shape reduces this complexity with reasonable desirable medial axis appearing when simplified with the parameter of around 100 (assumed to be meters in Pseudo-Mercator). Unfortunately there are two problems: the derived axis passes through large islands; and inflow streams are not connected.

I therefore took a different approach. I disassembled Windermere using ST_Dump and cut the line forming the outer ring at each point a stream or river way touched the lake. I then simplified each individual bit of shoreline between two streams & then re-assembled the lake.

When this is done all inflows & outflows are connected to the straight skeleton of the simplified lake area. This can be input directly into my routines for collecting all ways making up a watershed.

Additionally the straight skeleton can be pruned. The simplest one is to just remove all individual linestrings which dangle (i.e., are not connected to a waterway). Presumably one can iterate this until one has the minimum set necessary to a connected set of flows, but I haven't tried this. 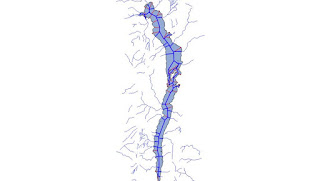 For a single lake it is possible to determine the appropriate degree of simplification to apply, but the complete set of lakes & ponds in Great Britain is a completely different matter.

Over simplification will result in too big a discrepancy between the original shape and adjacent geometries. Even for Windermere trying to include islands in a reassembly fails with too great a degree of simplification because geometries now cross each other.

My approach has been to simplify geometries with parameters from 50 to 250 metres in ST_Simplify. I then compare a number of factors with the original:
With these I then choose one of the simplified geometries for further processing. In general large lakes and riverbank polygons will tolerate more simplification. The overall result is less complicated straight skeletons for further processing. (As an aside I think Peter Mooney of Maynooth did some work on comparing lake geometries using OSM data around 2010 or 2011).

For my immediate practical purposes of finding watersheds I did not perform further pruning of skeletons, but such a process is needed for other applications such as cartographic generalisation.

Even with my first approach which I thought was fairly robust I'm losing a fair number of  waterways with simplification. I haven't looked into this further because it will delay finishing this particular post: and it's been on the stocks long enough.

For further posts on the problems of skeletonisation read Stephen Mathers blog which I found very useful. StyXman is developing a JOSM plugin which uses some of these techniques to create centrelines too. A big thank you to him, and, of course, to Christoph Hormann (imagico).
Posted by SK53-osm at 11:48 No comments: