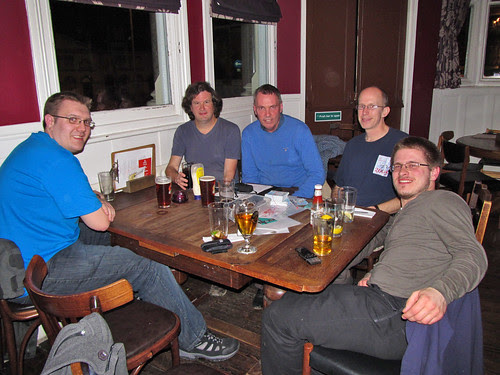 After Mark Iliffe & I met at State of the Map 2010 in Girona, we talked about arranging an event for OSM contributors in the East Midlands to meet-up. As Mark was then Leicester-based we'd been thinking of a mapping party. However, with Mark doing a PhD in Nottingham it seemed that we could start with something a little less formal. A pub meeting seemed a good chance to meet some fellow mappers face-to-face and talk about the activities which interested people.

At the outset I hoped we might at get at least five people, that I'd get to meet another local mapper, and that we'd make contact with other interested parties.

I was immediately reassured when I saw that Shaun was coming. Neatly, he was my first ever OSM contact point when I first attended a London pub meeting almost exactly two years ago. Joining us were: local mappers Andy (SomeoneElse), Kev (kevjs1982) and Laura; David came along representing Pedals, the local cycle advocacy group; and Marcus came from Nottinghack, the Nottingham Hackspace. So 8 of us altogether was a nice turnout. It was nice to make contact with Pedals, and a wonderful surprise to discover about the hackspace.

Subjects which came up in the course of the evening:
My OSM logo muffins were rejected! Largely (I hope) because most people had either eaten pancakes before hand or had ordered one of the absurdly generous portions from Borlase Warren's menu. At least there was some semblance of cake at the meeting.

A straw poll suggested that we should do it again, and so I'll be scheduling a date for April real soon now.

Any OpenStreetMap is, of course, an opportunity to add to the map, so I'm glad to report, that after an extensive survey, Andy (SomeoneElse) summarised our conclusions.

PS. I went to Nottinghack's weekly opening evening the following day and was able to add them to OSM.
Posted by SK53-osm at 21:15