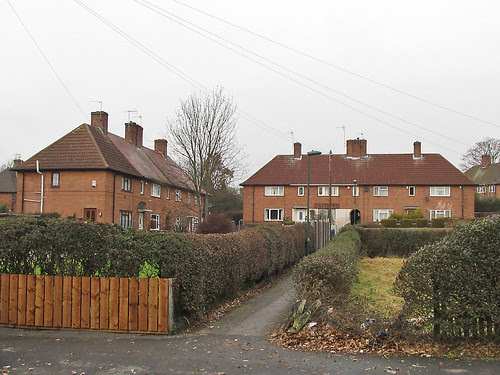 I'm going to be using the word "Twitchell" a lot here in the near future. Usually a twitchell is a narrow path connecting two roads, but from the mid-1920s to the mid-1950s groups of houses accessed down a twitchell were a characteristic feature of the council estates built by the then Nottingham Borough Council. The picture shows a typical one from the Edwards Lane Estate (built just pre-WWII, more later). I presume the gardens were originally fenced, but privet hedges were standard when I was growing up in the 1960s (not much else could survive in the air polluted by coal fires and local industry).

There is surprisingly little on the web about it, here are a couple of the more useful posts I've been able to find:

This is what the OED tells us about twitchell and twitten:

I was born "up the gennel" Bestwood colliery village Nottm. There it refers to the alleyway between the backs of two parallel rows of houses with walled back yards. It was wide enough for the dustbin lorry to drive down and empty the middens that were accessed either side of the gennel via a wooden door set half way up the wall for each house. I understood that a Twitchel was a wide usually hedged alleyway as was a gitty, but more narrow. Whilst an "Entry"was the narrow passage in the middle of a row of terraced houses leading to the backs of the houses, the rooms on the first floor either side covered it over the top making it like a tunnel.

from a genealogy forum

As the latter quote suggests the local terminology may be much more complex. The houses in the picture at the top have 'entries' to the back doors of the middle two properties. This dialect word also survives as a street name, "The Twitchell" in Chilwell, and a Weatherspoons pub in Long Eaton is called the "Twitchel Inn". Nominatim shows other uses, a street in Sutton-in-Ashfield, and a footway in Melbourne, Derbyshire, and, oddly, a street as far away as Baldock in Hertfordshire.
Posted by SK53-osm at 20:06